Seven consecutive time slots for a broadcast, numbered in chronological order 1 through 7, will be filled by six song tapes—G, H, L, O, P, S—and exactly one news tape. Each tape is to be assigned to a different time slot, and no tape is longer than any other tape. The broadcast is subject to the following restrictions:

“Seven consecutive time slots” immediately suggests a sequencing game, and that’s exactly what we get in Game 1. A slight oddity is introduced, but it turns out to be inconsequential: Six of the seven entities are song tapes with letter names, while the last entity is referred to as a “news tape.” Usually such a differentiation between entities means something, but here it doesn’t—if we call the news tape N, we simply have seven lettered entities to fit into seven time slots, which is as familiar a game action as any you’ll see on the Logic Games section. We’re told that no tapes share a time slot, and no tape is longer than any other, which are just loophole closers. So far then, any tape can be slotted anywhere. The Key Issues will be our normal sequencing concerns:

1) Which tapes must, can, or cannot be played in which time slots?

2) Which tapes must, can, or cannot be played consecutively?

A roster of the entities and seven dashes on your page should do it for an initial setup—there’s no need to get any fancier than that. You can include the news tape, N, alphabetically between L and O, or keep N separate for now, just in case this tape takes on some special significance in the game. (As we’ll see, it doesn’t—N will be regarded as just another entity.)

1) Rule 1 is a traditional sequencing rule that pairs up a couple of entities in a specific order. The upshot is that we’ll always have LO somewhere in the list, and you can simply denote this as ALWAYS LO.

2) Rule 2 links up nicely with Rule 1, and you probably didn’t have to wait until you got to Step 4 of the Kaplan Method to combine these rules to create an even bigger cluster: LO....N. Song tape O comes immediately after L, and then N must come some time after that. The dots remind us that it’s okay for other tapes to come between O and N; the rule is satisfied as long as N is anywhere to the right of LO.

3) Don’t let the wordiness of Rule 3 intimidate you: All it says is that two tapes must come between G and P, but G and P can appear in either order. This allows for two possibilities: G _ _ P or P _ _ G.

In a game so basic, there’s often not much in the way of Key Deductions. However, there are usually some implications of the rules that are worth noting. Take, for example, our main LO...N bloc. What does this tell us about L? Well, L can’t be played in slots six or seven, right? If it was, there wouldn’t be enough room for N at the end, and possibly O as well. Similarly, N can’t be played in slots one or two, because that would shove L, O, or both off the map at the beginning of the sequence. These may not seem like major deductions, but these limitations directly help us bag a few questions, notably Qs. 2 and 6.

The Final Visualization: Here’s what we have to work with heading into the questions: 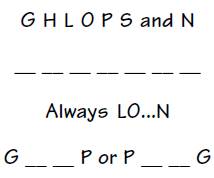 The first question launches right into a solid hypothetical, so it’s best to get the information into a new sketch on the page and see where it leads. Placing G into the second slot kicks Rule 3 into effect, forcing P into slot five; that’s the only way that exactly two time slots will fit between G and P as mandated by Rule 3. That leaves the LO...N bloc as our next major concern. Well, the LO pair physically fits into slots three and four or slots six and seven, but the latter case leaves no room for N. So L must be played third, and O fourth. The stem asks which tape must be third, and there we have it: L, choice (C).

We’ve already given N all the consideration that Q. 2 requires. Recall N’s limitations, discussed in the Key Deductions section above: N cannot be played first, because then there would be no room for the LO pair before it, and N can’t be played second, because even if we squeeze O into slot one, L would be left out in the cold. We’re looking for the time slot that N can’t take, so it’s either one or two. The testmakers chose “second” for choice (A).

Here, our two free agents, H and S, are to be slotted as far from each other as possible. How far is that? — is the question that should come to mind. We may as well try placing them on opposite sides of the ordering, that is, in slots one and seven. And it doesn’t matter which is on which side, since neither H nor S has any relationship to any other entity, thus making them functionally identical. Trying it out, we find that it is possible to place H and S on opposite ends of the ordering, as long as L and O take slots three and four, respectively. If this pair is in any other consecutive slots between two and six, there’s no way to satisfy Rule 3. A little trial and error shows that L and O must be in slots three and four, surrounded by G and P, in either order, in two and five. N is left for slot six.

Now, we’re asked about the first three slots, and while there’s some variability in slots one and two (slot one can be H or S, and slot two can be G or P), slot three is definitely reserved for L, so our best bet is to check the choices for that. This narrows the possibilities down to (A) and (C), and (A) is out for two reasons: First, G H L is an impossible way to start the sequence under any circumstances: Rule 1 would force O into slot four, while Rule 3 would have it going to P. That’s enough to eliminate (A). The other problem with (A) is that it doesn’t fulfill the requirement in the stem: H, in slot two, is not the furthest it could be from S. That leaves (C): H G L is a possible beginning for the ordering under these circumstances, as long as we flesh it out with O P N S, in that order.

What happens when P is fifth? G is second, and we’re right back at Q. 1 again. Lucky for us, since we’ve already worked through this scenario: As we saw there, when G is second and P is fifth, L must be third, choice (C).

What’s the greatest number of tapes we can get between S and N? As mentioned just above, we can use our previous orderings to help us out here. We’ve seen the same partial ordering in Qs. 1 and 4:

Another quick point for work already done: We thought through L’s limitations up front, so this one shouldn’t take much more than a few seconds. Since both O and N must come after L, L cannot be played sixth or seventh, which means the earliest slot possible for L is fifth, choice (C). And placing L fifth causes no other violations, as the ordering “G H S P L O N” readily proves.

We’re looking for a time slot for G that will decisively fix the time slot for O, and once again our previous work in Qs. 1 and 4 can help us out. In both of those questions, G was second, which forced L to be third and O to be fourth. “Second,” which would therefore be a viable answer, is conspicuously absent; notice how the choices jump right from “first” to “third.” This is not a problem, though, once we remember that G and P are interchangeable in this game. We can switch

without altering the logic in any way. P in two and G in five would thus force the same situation we’ve seen a number of times—L in 3 and O in 4. So placing G in slot five fixes O in slot four, and (D) is correct for the final question of this first game.

(A) If G is first, then P is fourth, and O can be slotted third or sixth.

(B) If G is third, then P is sixth, and O can be slotted second or fifth.

(C) If G is fourth, then P could be first, in which case O can be slotted third or sixth.

(E) If G is sixth, then P is third, and O can be slotted second or fifth.