Exactly six trade representatives negotiate a treaty: K, L,M, N, O, P. There are exactly six chairs evenly spaced around a circular table. The chairs are numbered 1 through 6, with successively numbered chairs next to each other and chair number 1 next to chair number 6. Each chair is occupied by exactly one of the representatives. The following conditions apply:

1) Which representatives can, must, or cannot occupy adjacent chairs?

Another important issue to look for in a circle sequencing set is the left/right issue. We need to recognize whether the set is concerned with who sits to the left and right of whom around the circle. How can we determine if this is an issue? A quick scan of the set will tell us. Nowhere in the intro, rules, or questions do the words “left” or “right” occur. As indicated clearly in the rules and questions, the set is concerned only with who is next to and between whom.

The Initial Setup: There are two ways to lay out a circle sequencing set. We can either draw a circle (and place the entities in chairs around it) or draw intersecting lines like the spokes of a wheel (and place the entities at the ends of those spokes). The number of spokes will depend upon the number of entities we’re placing around the table. The “spoke” method is often preferable because it clearly shows not only which chairs are next to each other, but also which chairs are across from each other. As we mentioned above, most circle sequencing sets are concerned with who’s across from whom, but scanning the questions, it’s evident that this set isn’t. From the scan of the questions, it’s also evident that even though the set numbers the chairs 1 through 6, none of the questions but the first mentions a chair number. So we won’t bother numbering the chairs in our sketch: 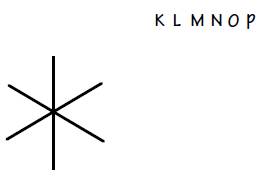 1) Pairs of entities are quite useful. Two entities that must always be together (or adjacent in this set) give us a solid point from which to begin work on each question. Rule 1 provides us with P and N as such a pair. Under Key Issues, we already recognized that this set isn’t concerned with who’s to the left or right of whom, so we don’t need to take that into account when symbolizing the rules. “ALWAYS PN” will serve as a reminder that these two must always sit together. (If this set did involve the left/right issue, we’d have to write “ALWAYS PN OR NP.”)

2) This rule may have looked complex and confusing at first, but remember to ask yourself what this rule means, not just what it says. After interrogating the rule in this way, it hopefully appeared neither complex nor confusing. It simply says that L must always sit next to M or N or both of them. Again, this set isn’t concerned with left/right, so “LM, LN, or MLN” is a good way to keep this rule in mind.

Key Deductions: The most important deduction here is recognizing that this set isn’t concerned with who’s across from whom and who’s to the right or left of whom. These realizations may not seem like enormous deductions, but they give us quite a leg up on this set. Now, we don’t have to waste time worrying about those issues, and this also leaves us greater flexibility to toss entities into the circle at the beginning of each question. Furthermore, we can simply throw the P/N pair from Rule 1 into the circle as the starting point when there seems to be no other logical place to begin (since we need not worry about the order they take as long as they’re adjacent).

The Final Visualization: Here’s what we have as we go on to the questions: 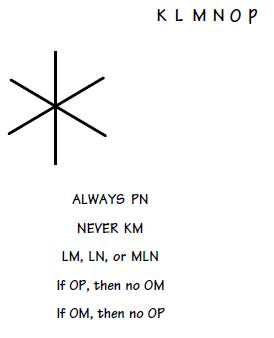 Oh good, here’s an acceptability question. Normally we’d just check each rule against the choices and eliminate the choices that violate a rule. However, there’s something we need to notice about this acceptability question. Thanks to the circular design of the table, the first person of each list (in chair 1) is next to the last (in chair 6). For example, we need to realize that, in choice (A), K sits next to L. With that in mind, we can treat this just like any other acceptability question; just grab each rule and cross off any choice that violates that rule. Rule 1 is violated by answer choice (E) which doesn’t have P next to N. Rule 2 requires that L be next to M, N, or both. Answer choice (A) has L next to O and K (L in seat 6 and K in seat 1) and so can be eliminated. Rule 3 forbids K to be next to M which answer choice (D) tries (M in seat 6 wraps around and is next to K in seat 1). Finally, the conditional Rule 4 is violated by answer choice (C) with has O next to both P and M. Choice (B) remains and is the credited response.

Once again, get the new information down and check the rules. We’re not concerned with the “left/right” issue, so just draw a new sketch and put K between L and P. Now look for rules with K, L, or P. Rule 1 says that P and N must always sit next to each other. K is next to P on one side, so N must be on the other side of P. Our new sketch clearly shows that L and N aren’t next to each other, which means it’s time to enact Rule 2: L must have M beside her. Only one entity and one slot remain, so O will fill in the chair between M and N. The new and complete sketch looks like this: 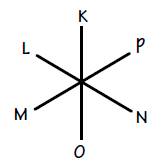 The question asks for the reps that M sits between, and that’s L and O, choice (B).

Once again, all you have to do is create a new sketch and add the new information: N is next to M. By now you should be used to putting P and N together. M is on one side of N, so P must be on the other. You should also be used to placing L next to M and/or N. There’s no open chair next to N, so L must go next to M. O and K are left to fill in the two chairs between P and L, and this time nothing forbids either of these people from taking either of the remaining chairs. The sketch therefore looks like this: 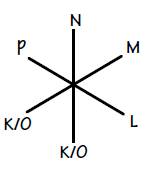 The question asks which reps K can sit between. Depending on where K and O sit, K can either sit between P and O or O and L. The testmakers chose the former in choice (E).

We’re helped immensely in this question by referring to our previous work. M is on one side of L, and the question asks for a complete list of all of the reps who could be on the other side. In the previous question, Q. 4, L was next to M on one side, and could be next to either K or O on the other. This immediately allows us to eliminate (A), (B), and (C), none of which includes O. (Incidentally, (C) is doubly wrong by not including K.) (D) and (E) are left. How are these two choices different? (E) includes N while (D) does not. If we can prove that N can be on the other side of L, then (E) is the answer; if not, we go with (D). Is it possible for N to sit on the other side of L? Sure, here is the complete ordering: 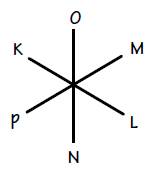 Once again, don’t hesitate to quickly redraw the master sketch including the new information from the stem (L next to N). L is on one side of N, so Rule 1 forces P to sit on the other side of N. Where to now? We’re left with K, M, and O to fill in the remaining three adjacent slots. We know from Rule 3 that K and M can’t sit next to each other, so they will have to be separated by O. Either K or M will sit next to L while the other sits next to P— and don’t forget O in between K and M, no matter which way K and M sit. With the exception of K and M, this ordering is completely set. Now move on to the choices, keeping in mind that we’re looking for the choice that must be false.

(B) could be true. M could sit between L and O with K sitting between P and O.

(D) must be true. We deduced from the information given in the stem that N must sit between L and P.

(E) must be true. As we saw in our original analysis and again in the context of correct choice (C), O must sit between K and M.

This stem tells us that K sits next to O. And we can’t take it any further. It looks like we’ll just have to check each choice. But don’t despair! Use your previous work. Look for instances where K and O sat next to each other and see which reps L was sitting between in those situations. This question asks who L can’t sit between, so we can eliminate any choice that is disproved by those previous instances. In the previous question, K was next to O, and in that setup, L could sit between either K and N or M and N. Eliminate choices (B) and (C). Where else was K next to O? In Q. 4, K and O sat together, and in that scenario we saw it was possible for L to sit between K and M—eliminate choice (A). Finally, in question 2, K and O sat together, and L sat between M and P. Eliminate choice (D). Choice (E) remains and is the answer.