With most “free-floating” sequence sets, the most natural way to work is vertically. Put the years along the side and list the employees. Notice that, as in Set 2, we’ve shortened the years to just 1 through 8. (You could also have worked horizontally by listing the years left to right like a timeline. Whichever way you choose, just make sure that your sketch is neat and not misleading.) 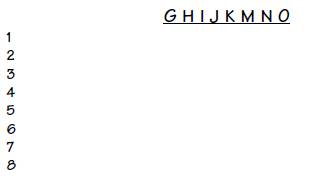 It’s also wise to take a moment and recognize what the sketch can’t tell us. Be careful not to assume any relationship between employees that aren’t connected by lines. For example, I, in our sketch, is slightly lower than M and O. But we can’t assume that M and O joined the company before I. We don’t know that. Be very careful when dealing with the two “arms” of the sketch. The “K—J—M” arm is not connected to the “H—N—O” arm. Therefore, we can’t deduce any relationship between the two. M, for instance, is quite low on the sketch, but since it’s not connected to the “H—N—O” arm, M could have joined the company even before H. Likewise, O could have joined before K.

The Final Visualization: Be sure you’ve kept all of your notations neat and easily accessible: 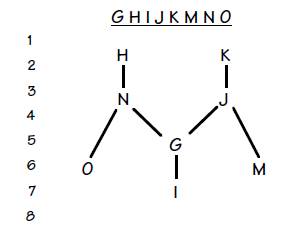 In a “free-floating” sequence set like this (when all the entities are in the master sketch), just check each choice against the sketch, using it to figure out the choice that is impossible.

(C) Four entities, H, K, J, and N are all above G in the sketch, so at least four employees joined the company before G. The earliest that G could have joined the company is 05. Answer choice (C) can’t be true and is the answer. Quickly, here is why choice (D) and choice (E) can be true.

We’re asked for the latest year that J could have joined the company. There are two ways to go about this: We can put as many employees as possible before J, or we can see which employees MUST be after J. Since the latter deals with what is DEFINITELY true while the former deals with what is POSSIBLE only, the latter is most likely going to be simpler and, more importantly, quicker. Look at the sketch, only G, I, and M are definitely placed below J. Therefore if G, I, and M joined the company in 06, 07, and 08, the latest that J could have joined the company is 05, choice (D).

From the master sketch, we’re able to deduce that either I, M, or O must have joined the company last, in 08. This question stem assigns O to 05 and M to 07. Therefore, I must have joined the company in 08. Now check the master sketch. H and N joined before O in the 01-04 slots. K and J joined before M and also before G. Since H and N must occupy two of the four 01-04 slots, K and J will take the other two slots which leaves G (which must go AFTER K and J) to take the remaining 06 slot. G and I are the only other entities whose slots can be determined, choice (B).