Richa spends 14 days, exclusive of travel time, in a total of six cities.

Don’t let the brevity of this game’s intro (one sentence!) fool you—as with all games, it’s vital that you conduct a thorough overview, and there’s quite a bit packed into that one little opening sentence. We need to consider Rule 1 as well to round out the picture. Richa spends a total of fourteen days in exactly six cities, each of which is located in one of three countries. After reading the introductory sentence and rules, you should have realized that you had a pretty strange game on your hands; all the more reason to concentrate on nailing down the game’s action. Basically, we need to distribute the six cities into the three countries and also to divide up the fourteen days between the six cities—thus, an oddball kind of grouping game of distribution with a heavy numerical element. Notice that the element we’re distributing has no name—the ”numbers issue” is the star of the show in this one. In most games we ask who goes where; in this one, how many go where will be the operative question throughout the game. It may seem a little convoluted, but games are always easier once we pare them down to their Key Issues, and here they are:

1) How many cities are visited in each country?

2) How many days are spent in each city, and by extension, in each country?

The Initial Setup: The main challenge here is the number element, but we do need to decide how to keep track of it all. At the start, we know that there are fourteen days spent in six cities, and (Rule 1) that the six cities are distributed among three countries. You can draw six dashes across the page and jot down a reminder of the total days, but that’s hardly progress. Best advice: Don’t draw anything yet. Wait and see where the rules lead.

1) Again, those six cities that Richa visits are each in one of three countries, X, Y, or Z. Since we are going to distribute cities among those countries, set up a column or list for each.

2) and 5) are loophole closers. Each country can have any number of cities—no limit on cities per country. And “a day in a city” means just that: Richa will not spend the morning in a country X city, for instance, and the afternoon in a country Y city.

3) Each country must be assigned at least one of the six cities. Draw a single dash under each country so as to remember the minimum per country. Make a mental note, too: Three cities are accounted for; the other three remain.

4) If Richa spends at least two days in each of the six cities she visits, then 2 x 6 = 12 days. Of the 14 days, then, 12 are accounted for: a minimum of two days per city. What about the remaining two days—can they be spent in a seventh city? No—we cannot assign Richa a seventh city; make sure you remember that she visits “a total of six cities.”

You probably embarked on Step 4 of the rules—even as you read Rule 4. With twelve of the fourteen days already spoken for (6 cities x 2 days per city), Richa has two remaining days that she can spend in any of the six cities. What are the possibilities? There are only two. Either:

That’s it! These are the only two possible ways to distribute the fourteen days.

The Final Visualization: Here’s the information condensed into one sketch: 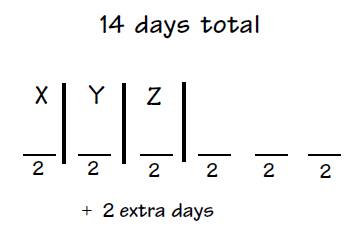 There are only a few ways for Richa to spend exactly eight days in Country X: We can add the three extra cities from the Final Visualization above to the city already listed under X, making a total of 4 cities in X, two days spent in each, for a total of eight days in X. Keeping one city in Y and Z adds up to the requisite six cities, and the extra two days can then be added to either Y’s city or Z’s city to account for the full 14 days. But it’s the other possible distributions that eliminate all of the wrong choices: The following possibility —

—we see that both (C) and (E) could be true as well. The only choice that CANNOT be true is (A): Richa must visit exactly three or four cities in country X, not two, if she wishes to spend exactly eight days there.

There’s another way to get this point: Maybe you simply went directly to the choices and found (A) to be impossible: If Richa visits exactly two cities in X, there are three choices: Two cities for two days each, two cities for three days each, or one city for four days and one for two: \

No matter what, the most Richa gets is six days in X, not eight as called for in the stem, confirming that (A) cannot be true under these circumstances.

“An equal number of cities in each of the countries” is just the testmakers being coy: There are six cities to be visited in the three countries, so “an equal number” means exactly two cities per country. At least two days are spent in each city, so that makes four days minimum spent in each country. 4 x 3 = 12, meaning that at this point two of the 14 days have yet to be assigned, and there’s no reason why both can’t be spent in country X. Richa can spend up to six days in country X, choice (D).

Take this question stem one step at a time. Richa spends exactly three days in country Y. Well, she has to spend at least two days in each city, so Richa can visit only one city in country Y. (Make sense? Two cities would require at least four days.) Jot that down: 3 days, 1 city in Y.

Next: She spends seven days in country Z. Given that 2-day minimum for any city visit, Richa must visit exactly three cities in Z—one for 3 days, the other two for 2 apiece. (3 + 2 + 2 = 7.) No other way to distribute the 7 days of country Z. At this point the right answer is gettable, but let’s assume you didn’t stop to notice that (few would).

We’re left with four days to be spent in country X, and two cities left to be accounted for (remember, we know there’s 1 city in Y and 3 in Z). Clearly she spends two days in each of country X’s two cities.

Scan the choices against these deductions. Richa can’t visit exactly two cities in country Z—it has to be three. (D) must be false and is the answer. All of the other choices are true statements.

One of the six cities now has a name: Nomo. Richa wants to spend as many days as possible in Nomo, which is in country X. Under Key Deductions, we saw that since Richa must spend at least two days in every city she visits, the most days she can spend in any one city is four. So we can infer that she spends four days in Nomo. Make Nomo the city already in X from our master sketch, and add the two extra days to give Nomo a total of 4. This means she’ll have to spend two days in each of the other five cities, to get to the total of 14. We were told that Nomo is in country X, so as long as Y and Z are assigned at least one city each, the other three remaining cities yet to be placed in our master sketch can go in of any of the three countries. Keeping all of this in mind, check the choices.

(A) Nomo needn’t be the only city in country X. In fact, fully four of the six cities could be in X, leaving one each for Y and Z.

(C) Richa will spend only four days in Nomo. As we’ve seen, four days is the maximum for any city, so six is impossible.

(D) Sure she can; actually, Richa could spend up to eight days in country Z (4 days in X’s Nomo; 2 days in a single Y city; and 8 days spread throughout 4 Z cities).

(E) Actually, Richa can visit at most five cities in Y and Z combined—as long as she spends the required four days in X’s Nomo.