Seven children are to be seated in seven chairs arranged in a row that runs from west to east. All seven children will face north. Four of the children are boys: Frank, Harry, Ivan, and Joel. Three are girls: Ruby, Sylvia, and Thelma. The children are assigned to chairs according to the following conditions:

The Action: Back to the basics here in Set 3: “Seven chairs arranged in a row” immediately denotes sequencing as the set action. The entities, children, are split into boys and girls, but that’s not so tough to incorporate. And that west to east business, with all children facing north? Simply a different way of describing the kids’ relationships to one another. The reference to “facing north” suggests that there may be a left-right element to the set, which turns out not to be the case. So it simply boils down to seven chairs, seven kids, putting them in order—you’ve seen this (or will before we’re through with you) dozens of times. The Key Issue in sequencing sets is always the same—who’s where in the ordering. A quick glance through the answer choices on the page reveals that we’ll mainly be concerned with figuring out:

1) Which children must, can, or cannot sit east and west of which other children?

2) Which children sit next to which other children?

The Initial Setup: Since the east-west thing seems to play a big part in the questions, there’s no harm in jotting down a W and E to remind yourself at a glance which children are east of and west of each other. Get the boys and girls down on the page, throw in seven chairs, and you’re ready to see how the seating arrangement will be determined.

1) Talk about strict. No fun for these kids; one kid per chair. Just a loophole closer that you most likely assumed anyway.

2) It’s hard to wait for Step 4 of the Kaplan Method to consider the implications of Rule 2: There are four boys, and none of them sits next to any other one. Well, that’s not so easy to do in a sequence of only seven kids, is it? Your reaction to each rule is supposed to be “what does this mean” in the context of this set—and you needn’t postpone a deduction until Step 4 if it jumps right out at you. Hopefully you saw that the only way to space out four non-adjacent entities in a sequence of seven is to place them in spots 1, 3, 5, and 7—there’s simply no other way. At this point, just put a b for boy over those slots in your sketch, and a g for girl over the others. (Boy, girl, boy, girl . . . how quaint.)

3) Here’s the most concrete rule of the bunch, one that you may have jumped to right off the bat: It requires a touch of interpretation, but essentially means that Ivan is 5th. Chairs 5, 6, and 7 are the chairs east of chair 4, and the only one of those next to 4 is 5.

4) “East of” in this set means to the right, so this boils down to our usual sequencing notation I . . . S. Perhaps you thought this through in accordance with the deduction stated above. We’ll hold off until Step 4 and deal with it in Key Deductions below.

5) FR or RF must appear somewhere in the ordering.

Key Deductions: We jumped all over Rule 2 above; it seemed natural to work through the implications of the rule at that point. If you didn’t think it through then, you probably did so now. As you recall, we deduced that boys must sit in chairs 1, 3, 5, and 7, which leaves the girls in chairs 2, 4, and 6. Now we can combine that with Rules 3 and 4. Since Ivan is in chair 5, and Sylvia must be east of that, Sylvia must be in chair 6 or chair 7. But 7 is a boy’s chair, so Sylvia must sit in chair 6. Is that it? Don’t stop there; what else can we deduce? With Sylvia in 6, the other girls, Ruby and Thelma, must split chairs 2 and 4. And Frank, who must sit next to Ruby, must therefore sit in either chair 1 or chair 3. This latter piece of information comes in especially handy throughout the questions. (You could take it one step further by noticing that chair 7 must be occupied by either Harry or Joel, but the set isn’t won or lost on this tidbit.)

The Final Visualization reflects the rules and all the deductions discussed above: 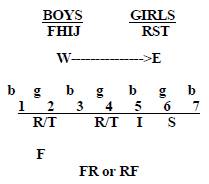 The major challenge of Q. 1 is figuring out exactly what they’re looking for, so a careful reading is in order. First of all, what is a “pair of chairs in which Frank and Ruby can sit”? Let’s check it out: We see from our sketch that Frank can be in chair 1 with Ruby in chair 2, so chairs 1 and 2 together count as one acceptable pair for this couple linked by Rule 5. Keeping Ruby in 2, Frank can move to 3 without a hitch, so there’s a second pair, chairs 2 and 3. But Ruby can also be in chair 4 when Frank’s in 3, so 3 and 4 together counts as our third pair. Any others? Nope, so three it is, choice (C).

Next we’re to find a statement that must be false, which means that each wrong choice will either be true or possibly true. Notice how all the choices involve Frank, which is nice because we know plenty about Frank’s prospects. In fact, simply recognizing that Frank can be in the first chair allows us to kill choices (A), (B), and (E), since if Frank were to take chair 1, everyone would be east of him. Upon analysis, we see that (C) is the impossibility we seek: We deduced up front that Frank must sit in either chair 1 or 3. But even if we slide Frank down as far east as possible—that is, chair 3—there’s no way to fit both free agents Harry and Joel west of him, considering that either Ruby or Thelma must take chair 2. (D) is possible: One of our boy floaters, in this case Harry, can certainly hang out with Ruby on the west side of Frank—H in 1, R in 2, and F in 3 would do the trick. But we can’t get both Harry and Joel west of Frank. As mentioned above, one of those guys has to be in the easternmost chair 7.

Good solid info is offered in this one, so here’s a perfect time to use your pencil—get it all down in a new sketch. Ivan’s in chair 5, so if Thelma’s next to him, she must be in chair 4, considering that we’ve already slotted Sylvia for chair 6. The stem also tells us that Frank is next to Thelma, so put F in chair 3, which leaves R for chair 2. Free agents Harry and Joel will float between chairs 1 and 7. We’re looking for something that could be false, and we can shorten our work by scanning the choices for Harry and Joel; after all, they’re the only ones not fully restricted here. Only Joel appears, and way down in choice (E). Lo and behold, Joel’s elusive nature does in fact make (E) the correct choice. (E) would be true if Joel’s in chair 7, but would be false if Joel’s in chair 1.

We already have Frank’s location narrowed down to either chair 1 or 3, and the information in the stem allows us to deduce it must be 1. How? Because chair 3 is next to chair 4 which does seat a child sitting next to Ivan (who we know is in 5). The stem says Frank can’t sit in such a seat, so Frank goes to 1, which forces Ruby into 2 (Rule 5) and Thelma into chair 4. Once again, we’re left with our two free agents, H and J, this time floating between chairs 3 and 7. Checking the choices, we see that only (B) could be true—if Joel’s in 3 and Harry’s in 7, then Joel indeed would be sitting west of Ivan. All of the others are impossible. (You may have eliminated (A), (C), and (D) quickly on account of the fact that with Frank in chair 1, ain’t nobody west of him.)

If you’re not convinced yet as to the importance of the Frank deduction, here’s another question that falls pretty easily thanks to the fact that Frank must be in 1 or 3. If Frank took chair 1, he wouldn’t be east of Ruby as the stem demands; so Frank must sit in chair 3 with Ruby in chair 2. That again lands Thelma in chair 4 (familiar territory for her), which again leaves 1 and 7 for Harry and Joel to fight over. Again, everyone’s placed but those two. From this ordering, we can see quite readily that the only pair that cannot be next to each other is the duo of Ivan and Ruby—Frank and Thelma come between them. Choice (A) contains folks that are next to each other, while the others contain pairs that could be, depending on where Harry and Joel sit.