“Weekly schedule” is a sure sign of sequencing, and indeed, we are mainly concerned with ordering students throughout a five-day period from Monday to Friday. One small wrinkle, though: There are six students for the five days, so exactly one day will get two students, whose sessions will be “separate but consecutive.” This two-student day lends a very small grouping element to the set, but so small in fact that we’ll just consider this to be a standard sequence with a minor twist. If you took a peek at the rules, you’d notice that all but the last deal with our typical sequencing concerns—or as we like to call them, the Key Issues—namely:

1) Which students must, can, or cannot be scheduled for which days of the week?

2) Which students must, can, or cannot be scheduled consecutively with which other students?

To which we’ll simply add the one additional issue here:

3) Which day of the week gets two students, and which students are they?

No great difficulty picturing this setup; simply get the days of the week and students down on the page and you’re ready to see what the rules have in store for our aspiring gymnasts: (“No days free” is a good reminder of the stipulation in the intro paragraph that aside from the double-student day, the coach meets with exactly one student each day.)

2) No reason not to jump right to the most concrete rule of the bunch: Student I’s on Thursday, so build that right into the sketch.

1) Standard sequencing fare: H . . . Z should help us to remember this. You should make a mental note, however, that due to the slight wrinkle (the two-student day), this rule does not necessarily imply that H’s session will be on an earlier day of the week than Z’s. It must come “some time before,” which leaves open the possibility that H can be the first student of the two-student day with Z’s lesson later that day.

3) Here’s the more standard adjacency type of sequencing rule that we’re used to: K and O must fall on consecutive days of the week, in either order. KO or OK will remind us of this.

4) Monday and Wednesday will have one student, so the two-student day will be either Tuesday, Thursday, or Friday.

Key Deductions: Not much to combine here, is there? Notice how no entity appears in more than one rule, a fact that makes it less likely that a big deduction will exist. Trying out a few scenarios leads to the conclusion that the possibilities are not very limited thus far, which means that our best bet is to move right on to the questions.

The Final Visualization contains all that we’ll take with us into the questions: 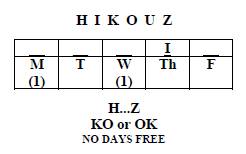 The set gets off to somewhat of a nasty start with this “could be true” question—with no big deductions at our disposal, there’s not much to do but simply try out the choices. We could postpone this one for later, hoping to see a pair among the choices show up together on Tuesday in another question, but that’s not all that likely, so we may as well simply get to it. First, we can check to see if any choices directly violate a rule, and in fact (C) bites the dust on account of Rule 3: K and O, scheduled for immediately consecutive days, can never be on the same day. It would nice if a choice contained I who must be on Thursday, but no such luck, so from here we’ll just have to test the remaining choices:

(A) Can H and U pair up on Tuesday? Nope—that leaves no room for the KO bloc. With H and U taking up the double day, there’s no way to get K and O on consecutive days without doubling up somewhere else. And that means that any pair that doesn’t include either K or O for Tuesday will result in the same violation. This insight effectively eliminates (B) and (E), and we’ve already axed (C) for the reason stated above, so (D) must be correct. If you test it out—and by all means in this situation, you probably should—you’ll see that

is a valid ordering, confirming (D) as the pair that could be scheduled for Tuesday.

K’s on Tuesday, so get that into a new sketch. Not much to work with, but the question’s specificity tells us where to go next—we need to find the earliest spot for Z. The earliest day is Monday, and while Rule 1 would allow H and Z on Monday (as long as H went first), Rule 4 forbids it—the double-student day can’t be Monday. What about Tuesday for Z? No problem there:

This ordering takes care of the stem and satisfies all the rules, proving that Tuesday, choice (B), is the earliest day for Z under these circumstances.

Yuck. A non-if “must be true” question is perfectly welcome when there’s a big deduction up front, but what must be true here given no new information? Nothing, really, except maybe something negative like “Z cannot be scheduled for Monday”—but the choices here are all themselves hypotheticals. However, the task is made a little easier by using work from the previous two questions. The schedule we formed in Q. 2 allows us to kill (E)—there we see that U can be on Friday while Z need not be on Thursday. And the schedule we created in Q. 1 shows that U and O could both be on Tuesday, effectively killing choice (B). The rest, however, we’ll have to work out:

(A) If U is on Monday, does H have to be on Tuesday? The test is to see whether we can place H on some other day. And we can: If K and O are on Tuesday and Wednesday (in either order), then H can be on Thursday with Z on Friday. So (A) need not be a true statement.

(C) With U on Wednesday, K and O can take Monday and Tuesday, leaving H and Z for Thursday and Friday, respectively. So U on Wednesday does not force Z into Tuesday, and we can cross off (C).

(D) is all that’s left, so it must be correct. For the record: With U on Thursday, the KO pair must be scheduled during two consecutive days between Monday and Wednesday. To get H before Z, H must take the leftover day before Thursday while Z is slotted for Friday.

Q. 4 requires some trial and error, but a little cleverness makes the job easier. We’re asked to find the day for Z that would fix U’s position in the schedule. The shortcut here is to recognize that the end of the week will probably pose more restrictions given the fact that I is already placed on Thursday. Testing out Z on those days at the end, you’ll find that Thursday, choice (D), is indeed the spot for Z that would fix U’s time slot as well: If Z is on Thursday with I, then our double-student day is used up. The adjacent KO bloc will have to fall on consecutive days between Monday and Wednesday (in either order), and H’s session must also be before Thursday to satisfy Rule 1. Either way, U is the only student left for Friday. All of the other choices leave U an option of at least two days in the ordering. (Note: If you started testing from the beginning, you would have noticed, as we pointed out above in Q. 2, that Z can never be scheduled for Monday. If Z’s on Monday, then H would have to come before Z on Monday (Rule 1), setting up a situation that would violate Rule 4.)

We get some info to work with here, but once again we’re faced with the prospect of testing out various scenarios. The schedule from Q. 1 applies, as H’s session could be immediately after U’s in that one, but unfortunately none of the choices conform to that schedule. And there’s not even a likely candidate here as in the previous question, so we really have no choice but to try ‘em out. Luckily, (A) comes through as the winner, as illustrated by the following schedule:

There are other ways to space out Z, K, and O from the middle to end of the week, but all we need is one instance that works with respect to H and U to choose (A) for this “could be true” question. As for the rest:

(B) With U doubling up with I on Thursday, it’s not possible to put H on Friday and still have H’s session before Z’s (Rule 1). Sure, we could put Z later on Friday, but then we’d have two two-student days, in violation of the numbers rule in the intro.

(C) Scheduling both H and U on Tuesday causes the same problem we saw back in Q. 1—there would be no way to place the consecutive KO pair without doubling up somewhere else.

(D) With I already on Thursday (Rule 2), placing this pair there would result in three Thursday students. No good.

(E) If H and U were on Friday, then Rule 1 would force Z onto Friday’s roster as well, overburdening the poor coach with three Friday lessons. Again, no good.