Under the geometry section of various competitive exams like CAT, the most critical topic within geometry is Triangle. Many questions from triangle are based on the basic concepts like the understanding of sides and angles and a few elementary theorems on triangles.

It is interesting to note that the questions can be found even on very elementary concepts. In this article will be focusing on learning two concepts of triangles and their applications.

Sides of a triangle

Triangle is as a two-dimensional geometrical figure bounded by three sides. If we consider a triangle ABC and its corresponding sides to be a, b, and c, then conventionally side a is considered to be a side opposite to angle A. Similarly, side B and sides are supposed to be the side opposite to angle Band angle C respectively. 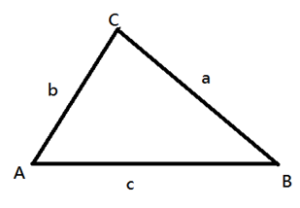 Rules on sides of a triangle

If we are given three sides of a triangle, then all the above three conditions must follow for the triangle to be possible. However, rather than checking all the three condition if we can check the condition that the sum of the two smaller sides is greater than the largest side, then the rest of the two conditions are automatically followed.

For example, let us assume that side c is the largest side of a triangle having three sides a, b, and c. So, if a+b>c, then the rest of the other two condition will automatically follow; we don’t need to check them.

Throughout this article wherever required, I’ll assume that side ‘c’ is the largest side of a triangle.

As I mentioned in the introduction, even in this concept, the questions have appeared in various exams. Let us take one such problem.

Question:  How many noncongruent triangles are possible such that their sides are integers and the perimeter is equal to 14.

Let us assume the sides of the triangle to be a, b, and c.

Now, there are two ways of solving the question. One method is to find all the possible combination of sides such that the triangle is possible using the sides. The second method is to apply the shortcut trick to get the answer directly.

Let us discuss both the ways.

The largest side of the triangle cannot be 7 or more than 7, otherwise, the sum of the other two sides will be equal to or less than the third side (largest side).

Therefore, the maximum length of any side has to be 6 or none of the sides will be more than 6.

Using the above constraint, we will be making the combinations for sides which have been given in the table below:

Hence, we can say that there are four noncongruent triangles.

Shortcut tricks:
Number of non congruent triangles with integral sides and perimeter say ‘n’, is given by the following formula:

In the above question, n= 14, that is even. Therefore, by applying the formula, we get

Categories of a triangle based on its sides:

Triangle can also be categorized based on the interior angles.

Consider, a, b, and c to be three sides of a triangle and say c is the largest side, then

Let us take two examples on the concepts we just learned.

Solved questions on concepts of the triangle

Question:  Consider an obtuse triangle with sides 8cm, 15cm & x cm. If x is an integer, how many such triangles are possible?

Assume that the two sides to be 8 and 15 and the third side to be x.

So, the possible values of x for which the triangle is possible are integers from 8 to 22 including both.

But, we have to find how many of them are obtuse.

Therefore, we will be applying the other concept for an obtuse triangle, and that is the sum of the squares of the two smaller sides is always less than the square of the third side.

Case I:  x is the largest side.

Therefore, the total number of obtuse triangle possible is 10.

Some important properties of triangles