1. There were equal numbers of domestic and foreign products.

2. Half of the domestic products were FDA approved cosmetic products.

4. There were 140 nutrition products, half of them were foreign products.

How many foreign products were FDA approved cosmetic products?

How many cosmetic products did not have FDA approval?

Which among the following options best represents the number of domestic cosmetic products that had both the approvals?

If 70 cosmetic products did not have EU approval, then how many nutrition products had both the approvals?

The first plot shows the revenues and costs incurred by the companies during these years. For example, in 2021, company C earned Rs.100 crores in revenue and spent Rs.30 crores. The profit of a company is defined as its revenue minus its costs. 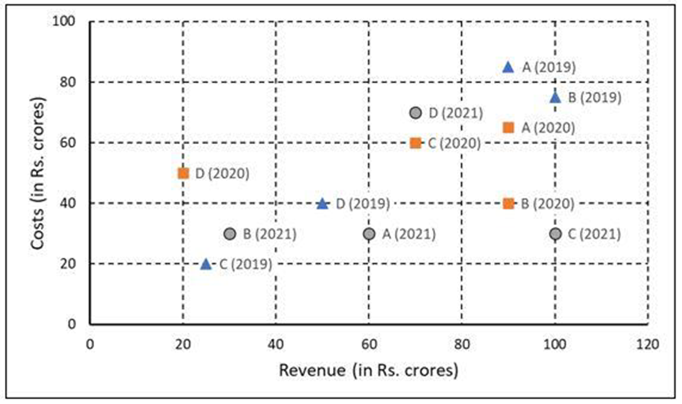 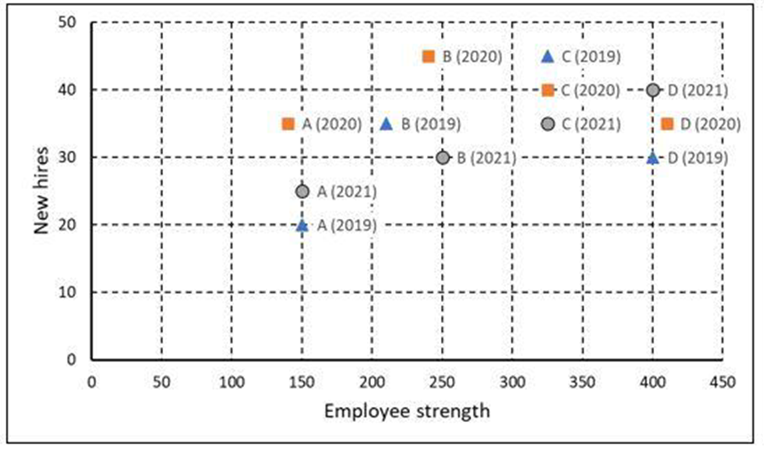 Considering all three years, which company had the highest annual profit?

Which of the four companies experienced the highest annual loss in any of the years?

The ratio of a company's annual profit to its annual costs is a measure of its performance. Which of the four companies had the lowest value of this ratio in 2019?

1. Over the two days, all three of them met the same total number of households, and each of them sold a total of 100 items.

3. Hokli could not sell any item on the second day because the first household he met on that day complained against him.

4. Tohri met 30 more households on the second day than on the first day.

What was the total number of households met by Tohri, Hokli and Lahur on the first day?

How many TRICCEK items were sold by Tohri on the first day?

How many households did Lahur meet on the second day?

How many households did Tohri meet on the first day?

Which of the following statements is FALSE?

Every day a widget supplier supplies widgets from the warehouse (W) to four locations – Ahmednagar (A), Bikrampore (B), Chitrachak (C), and Deccan Park (D). The daily demand for widgets in each location is uncertain and independent of each other. Demands and corresponding probability values (in parenthesis) are given against each location (A, B, C, and D) in the figure below. For example, there is a 40% chance that the demand in Ahmednagar will be 50 units and a 60% chance that the demand will be 70 units. The lines in the figure connecting the locations and warehouse represent two-way roads connecting those places with the distances (in km) shown beside the line. The distances in both the directions along a road are equal. For example, the road from Ahmednagar to Bikrampore and the road from Bikrampore to Ahmednagar are both 6 km long. If the last location visited is Ahmednagar, then what is the total distance covered in the route (in km)?

If the total number of widgets delivered in a day is 250 units, then what is the total distance covered in the route (in km)?

What is the chance that the total number of widgets delivered in a day is 260 units and the route ends at Bikrampore?

If the first location visited from the warehouse is Ahmednagar, then what is the chance that the total distance covered in the route is 40 km?

If Ahmednagar is not the first location to be visited in a route and the total route distance is 29 km, then which of the following is a possible number of widgets delivered on that day?