Skip to content
Alpi is a 2 year kid who likes to play with her 5 different toys A, B, C, D, and E. She has exactly one toy of each kind. She played for seven consecutive days starting from Monday, and each dayshe played with at least one toy. The duration (in minutes) for which she played with each of the toys is given below:

The bar graph shows the total duration (in minutes) for which she played with the toys for seven days. All the seven days are disguised as D1, D2, D3, D4, D5, D6, and D7 (i.e. not necessarily in the order from Monday to Sunday). 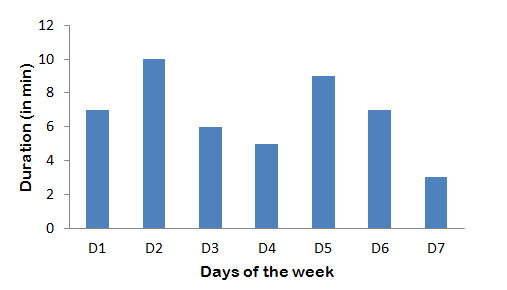